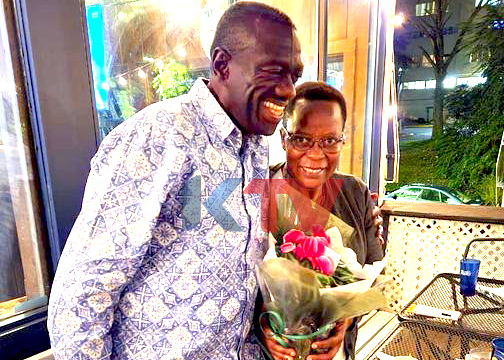 Rtd Col Kizza Besigye has come out and provides an update about the health of Mukono Municipality representative in the parliament Hon Betty Nambooze, since he met with her last evening on Thursday in New York state.

Besigye who currently is in the United States of America said that he managed to pay a visit to Hon Betty Nambooze who was airlifted to US in June of this very year after her condition worsened.

“I’ve visited Hon Betty Nambooze in New York and was comforted to find her looking more fit & in high spirit than I’d seen her for quite some time!
We continue to pray for a quick and full recovery” Besigye posted.

In November 2017, Nambooze, 52 underwent surgery at Manipal Hospital in India after doctors found out that she had suffered from spinal compression. The doctors advised her not to sit for long lest she stress her spinal cord and suffer more problems. They told her she would not fully recover until two to three years after the surgery.

This was after being treated for a month at Bugolobi medical Centre following an injury she sustained during the fracas in Parliament on September 27 when the then Igara West MP Raphael Magyezi (now Local Government Minister) tabled the bill which later saw the removal of age limits for presidential candidates in the constitution.