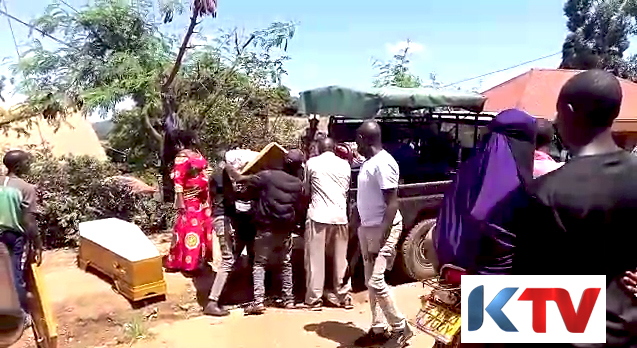 Residents of Masajja Zone, Busabala Ward, Makindye Division in Wakiso District broke into a fight over the burial of a 15 year old boy, that succumbed to unknown disease.

The fight broke out between the residents on the side of the deceased’s father against the deceased mother’s family.

The boy, Identified as Yiga Owen, died at his father, Kasozi’s house at Kibibi B Cell, Busaabala Ward in Wakiso District. Kasozi took the body to his father in Masajja Zone who asked him to produce a medical report before burial.

Kasozi, with the support from mob residents, dragged the body to the grave as his father called the police to intervene.

‘’After I sorted everything, my dad is conniving with the police to fail me. I want my child buried at this very time. I’m the father. I can give any directives not him, ’’ Kosozi ordered for the burial.

The local people complained that Mr. Mahaba did not stretch a hand in the burial process but only ordered the son to provide a medical report. They decided to bury the body yet nobody had prayed for it.

‘’We have not got any money from the father and the mother’s sides in the burial process. Right now, for us the local people, we are planning to bury the body and not going for medical examination. The child has died and that is all,’’ Complained the locals in the angry voices.

However, Kasozi’s father Mr. Mahaba and in-laws refused to bury the grandson without the medical report. They reported the incident to police to help him process the medical checkup and reveal the cause the death.

‘’ He has not been home for four years. Today he brings the dead child. I have to know who that child is and what has killed the boy. I have to first get a medical report before we bury the child,’’ said Mr. Mahaba.

The police arrived at the scene as soon as the angry resident reached the grave yard to bury the body. The police calmed the situation and took the body to do a medical examination before the burial takes place.